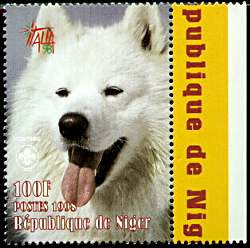 Stamps created to show payment of taxes on opium, coca leaves, and their derivatives in use between 1919-71. These long stamps were applied to narcotics containers.

Postmark in which the text is formed by the uninked part of the marking, rather than the inked portion of the design.

Often used in sales books or by dealers in pricing stamps. A net price may not be further discounted.

A recent stamp or set of stamps issued by any country or postal authority. A new issue dealer sells the newest stamps of one or more countries.

Many collectors rely on new issue services to keep their collections up to date with stamps from various countries. A new issue service works by keeping a subscriber list of collectors, collecting deposits, and mailing the new stamps out in small batches after they are released. A new issue service may either be maintained at face value by the postal entity responsible for the stamps, or by a stamp dealer for a slight cost above face value.

The first meaning, which is obsolete, is a surcharge - a new, different denomination printed over an old one. More commonly, however, a new value refers to a new stamp in an existing stamp series that bear a denomination that is different from all others in that particular series.

Stamps created to pay postage on newspapers, periodicals, journals, and other forms of printed matter. Some types of these issues combine tax and postage, thus becoming both postage and revenue stamps. Several forms of newspaper stamps are created for use on individual mail pieces or papers, while others exist to pay bulk postage on large shipments of printed material. Newspaper stamps in their various forms exist from many different countries, including the United States. Newspaper stamps also are commonly referred to as journal stamps, although the latter term often refers to lower denomination issues.

The end of a perforation tooth that has been poorly torn and is rough looking. It is a common trait and is considered a minor fault.

State and Indian reservation revenue stamps issued for use on various game licenses. These items, often inexpensively printed and humble appearing, frequently are many times scarcer than their more attractive counterparts. These exist for duck, small game, fish, and other recreational hunting purposes.
Posted by StampDad at 5:19 PM