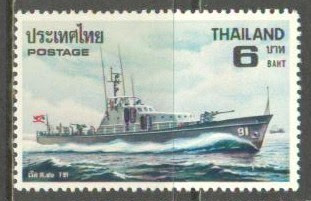 A non-postal pictorial or text label attached to a postage stamp for various purposes. In recent years, tab has become the standard terminology to refer specifically to the labels on the stamps of Israel.

On U.S. stamps, tagging refers to the intentional application of phosphorescent compounds that react when exposed to short-wave ultra-violet light on stamps or other postal paper. This is a photochemical reaction that can be detected by modern mail-handling equipment and used to correctly orient a piece of mail for canceling and sorting. In block tagged stamps, a rectangle of transparent but UV-reactive ink (called taggant) is applied. In overall tagging, as the name implies, the taggant covers the entire surface of the stamp, usually including the margins. Many recent stamps are printed on prephosphored paper, in which taggant is already present or is applied before printing. For stamps of other countries, tagging also refers to intentionally applied luminescent material that may be either fluorescent or phosphorescent. Most forms of tagging are invisible to the naked eye.

The ghost image of a stamp image, text, or plate number, picked up wet from freshly printed stamps by the tagging roller and deposited on the next impression. Tagging ghosts are frequently mistaken for double printings, but are a form of set-off freak. Tagging ghosts that are quite clear are highly collectible.

A cancellation marking composed of a series of concentric rings. Target cancels are a form of mute cancel that has been used in many countries for many years.

Photographs from the Civil War era bearing revenue stamps on their backs. The tax act of 1864 (one of the later taxes of the Civil War) levied certain taxes on two arbitrary categories of photographs. One category included photos of artwork, engravings, and other types of illustrations. The other category covered all other types of photographs. It is the second type that required the use of revenue stamps. The tax (with one change in 1865) was effective from August 1, 1864, until July 31, 1866. Tax paid revenues differ from most other types in that they are not denominated in dollars and cents. Because of this, taxpaids are not listed in the Scott catalog - but that doesn't mean they don't have a strong devoted following. Taxpaids exist for many types of food, alcohol, and tobacco products, and each classification has many types.

The projecting remnant of perforations along the edge of a stamp, formed by what was the bridge of paper between the perforations on un separated stamps. Each individual tooth gives a stamp its own personality and can be used much like a fingerprint for identification of a specific stamp.

The 300th anniversary of a birth of other event.

Those covers and postal markings applied by active post offices in areas that have not yet been admitted to the union as states. In the case of Alaska and Hawaii, for example, pre-1959 postmarks are territorial's. Generally, territorial's are scarcer and more desirable than those markings applied after statehood. This is particularly true of the older states and those from the American Frontier.

One form of testing stamp created for experimental use. As with any test stamp, the primary reason for the existence of a test coil is so that tests can be run without using postage stamps, which could be misappropriated. Test coils in the United States have been created to test printing and processing equipment at the Bureau of Engraving and Printing, the vending machines of the U.S. Postal Service, and the stamp-affixing machines of many large mailers. In most cases, test stamps are never intended to reach the philatelic market and, in fact, such items were heavily controlled until the 1970s. As more and more material began to leak out (probably from private mailers), more collectors were able to obtain it for their collections and interest in these cinderella's has grown steadily since.

Attached stamps that have designs inverted in relation to each other. This French term means head-to-tail. Tete-beche stamps may occur as a natural part of stamps production, such as some booklet formats and in the production of triangular stamps, or they may occur as a result of production error. Such errors normally are scarce. Tete-beche stamps are generally collected either as pairs, or as triplets, with the upside-down stamp in the center.

Late in 1962, almost immediately after the United States Post Office Department intentionally printed millions of Hammarskjold invert stamps to destroy the value of the error, panes of the Canal Zone stamp featuring the Thatcher Ferry Bridge were discovered with the silver bridge omitted. Once again, the USPOD was prepared to ruin the value of the stamps by intentionally printing millions more. Legendary dealer H.E. Harris intervened and immediately filed suit against the USPOD to prevent this from occurring. In the landmark case, which Harris won, the USPOD was prevented from ever reproducing errors to destroy collector value. Today, the Thatcher Ferry Bridge error is worth thousands, while the Hammarskjold invert is not worth significantly more than a normal example.

Similar to topical collecting, thematic collecting strives to tell a complete story; for example, a thematic collection dealing with smoking would include not only topical items, but also historical related postal items. Thematics leave more open to an individual's own interpretation than the strict collecting of topical material that simply depicts the desired subject.

A type of paper where the image is produced by the use of heat, laser beam, or pressure. Such stamps are difficult to store for long periods of time without damage.

Damage caused by the careless removal of a stamp from its cover or of a hinge from the stamp which leaves part of the stamp paper thinner than normal. Since the damage occurs on the back side of the stamp, it is not always visible when the stamp is viewed from the front. Thins are a form of damage to a stamp and lower a stamp's value. Sometimes referred to as a "thin spot" of "skinned spot."

Gimmick stamps created primarily during the 1960s and 1970s by countries looking to boost sales of their stamps to collectors. A special ridged plastic was used to reproduce a stamp image in relief. Such stamps have ceased, because hologram technology makes 3D images much easier, and in most cases, less expensive to reproduce.

A term denoting a marking on a cover that marries or ties the stamp or other item to the cover or card. The ink from the device carries over onto the cover, leaving the impression of being tied. Tied seals, stamps, and other items are important for documenting whether such items truly originated on a given cover.

Tongs
A special type of tweezers specifically designed for use by stamp collectors. Unlike tweezers, tongs are made under more exacting standards and come in a number of styles, from spade tip to needle nose. Also, and more importantly, the surface of a tong tip is never textured. These ridged edges, found on most tweezers, will harm stamps. Do you need some tongs? Championship Stamp Supply offers dozens of different tongs for stamp collectors.

This increasingly popular form of collecting involves gathering stamps, postmarks, meters, and other postal items that illustrate one particular topic, such as cats, dogs, boats or spaceships.

A generally unacceptable condition of a stamp, rendering it a space filler worth a tiny fraction of a sound copy's value. In some rare cases, such as the early stamps of Afghanistan (where postal clerks tore stamps with their teeth), a tear, punch, or other damaging defacement served as a customary form of stamp cancellation.

The most common form of postmark, giving the town name, and usually the state and date mailed. Most town-name postmarks are hand-stamped markings.

These items, which are still produced in many countries, date back to business schools of the 19th century. Training stamps are now primarily crated in some countries for postal clerks in training. Such clerks, both civilian and military, frank, process, and cancel dummy mail franked with training stamps. Training stamps may be actual postage stamps that have been deliberately defaced for use in postal training, or they may be cinderella items that are designed and printed specifically for that purpose and have no true postal value. All are quite collectible. Because they both display block lines, some collectors confuse the barred training stamps of Great Britain with the graphite line varieties of the same countries.

Used in the siderography process to transfer the image from an engraved die to a printing plate. After the steel die is hardened, a softened transfer roll is rocked in creating a positive relief image. Once several entries are placed on the transfer roll, it is hardened and is then rocked into the softened plate, creating an incised reverse image.

These are generally minor varieties that appear on stamps at random, as opposed to constant varieties, which always appear on the same stamp in the same place in each pane or sheet printed. Transient varieties include ink smears, blobs, streaking, and other production-related anomalies.

A special order form of postmark that frequently contains the word "transit" in the device itself. The marking denotes the piece is en route and sometimes indicates a delay of some sort. Although some postmarks are still added en route, arguably classifying them as transit markings, the devices themselves and the practice were officially discontinued many years ago.

A multiple of stamps of any size that shows a change from one form to another. The strip may be from sheet, booklet, coil, or any other format of stamps. The transitions referred to are often connected with major errors, such as a transition from perforated to imperforate stamps, or from full-color to color-omitted stamps. Error transition strips may be complete in as few as three stamps or as many as 20 or more. Such strips are usually scarcer than the error itself, so error transition strips frequently sell for a premium above the error itself, because of the amount of important information they supply.

Stamps released to mark the 300th anniversary of a significant date or event.

A mailed item that accurately reflects the postage paid by its stamp. Thus a 16.7-cent piece of mail bearing a 16.7-cent stamp is an example of a true franking.

A cover that has been turned inside out for reuse. This usually has been done in times of hardship, such as war or natural disaster. Some turned covers also have been created specifically by collectors as novelties.

The obsolete term referring to stamps printed by letterpress (formerly known as typography).
Posted by StampDad at 9:05 PM 1 comment: