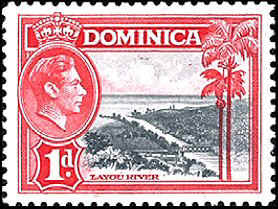 Definitives: Regular issues of postage stamps, usually sold over long periods of time. They tend to be fairly small and printed in large quantities often more than once.

Denomination: The postage value appearing on a stamp, such as 5 cents.

Die Cut: Scoring of self-adhesive stamps that allows a stamp to be separated from the liner.

Directory Markings: Postal markings that indicate a failed delivery attempt, stating reasons such as "No Such Number" or "Address Unknown."

Double Transfer: The condition on a printing plate that shows evidence of a duplication of all or part of the design.

Dry Printing: Begun as an experiment in 1953, this type of printing results in a whiter paper, a higher sheen on the surface, a thicker and stiffer feel and designs that stand out more clearly than on more standard "wet" printings.

Duplicates: Extra copies of stamps that can be sold or traded. Duplicates should be examined carefully for color and perforation variations.
Posted by StampDad at 7:36 PM No comments: