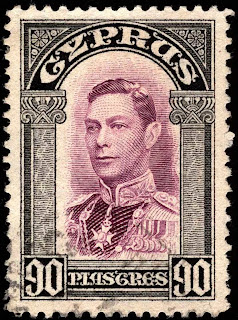 Cancel, Cancellation - [1] A handstamp or mark used across a postage stamp as an obliterator to render it invalid for further postal use. It may be a pen marking or even the removal of a small piece of the stamp.[2] The marks place by postal authorities which may indicate date, rate, route, or place of the mailing. Similar term to Postmark.Cancelled to order - A postage stamp bearing a cancel (invariably neat), but never postally used. Provided as a service by some postal administrations. Stamps so cancelled are not always distinguishable from postally used.

Cary, John - (b. d.) In 1798 John Cary produced his survey containing a list, of the " Distance of English & Welsh Post Towns from London & quot; along all the principal roads in the country resulting in a resumption of mileage stamps in 1801.

CAT - (Abbrev.) Catalogue value (unless there is no possibility of doubt, the publisher should be named).

CDS - (Abbrev.) Circular date stamp cancel.Census Marks - See Dumb Cancellations.Centered - In a perfectly perforated sheet of postage stamps, each stamp has the same size of margin on each side; in describing a valuable stamp it is desirable to comment on the centring by stating the stamp is 'perfectly centred' or 'centred to bottom', 'centred to top' etc. 'Centred to bottom' means the top margin is larger than the bottom one. The term is not applicable to imperf stamps.

Chalk paper - Describes postage stamps printed on specially treated paper to receive a good printing impression and to resist the removal of cancellations.

Charity stamp - (i) An adhesive label, not intended for postage use, issued in support of a charity. (ii) A postage stamp bearing a surcharge which, usually after deductions for overheads, is donated by the postal authority to a charity featured in the design of the stamp.

Cinderella - A stamplike label that is not a postage stamp. Cinderellas include seals and bogus issues, as well as revenue stamps, local post issues and other similar items.

Classic - An early issue, often with a connotation of rarity, although classic stamps are not necessarily rare. A particularly scarce recent item may be referred to as a modern classic.

Cleaning (stamps) - Soiled or stained stamps are sometimes cleaned with chemicals or by erasing. The cleaning is usually done to improve the appearance of a stamp. A cleaned stamp can also mean one from which a cancellation has been removed, making a used stamp appear unused.
Posted by StampDad at 5:08 AM 2 comments: