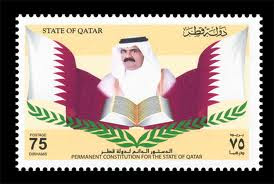 Quadrille A type of paper with intersecting vertical and horizontal lines that form small squares or rectangles. These rectangles may either be formed by a watermark or by a pattern of oil or lacquer. A number of French colony stamps of the turn of the century were printed on a quadrille paper. The term also applies to a specific form of album page with a lightly printed network of squares. This quadrille pattern is used by collectors as a guide for centering and mounting stamps on pages.

Quadripartite labels: postal labels made up of four parts; divided by roulette or perforation.

Quadripartition: four stamps that together form a completed design.

Qu'aiti State of Shihr and Mukalla: found in Scott Catalogue, Volume 1 after Aden-Kathiri State of Seiyun.

Quaker postmark: where the month is designated by a number and not name; The Society of Friends is opposed to the pagan naming of the months.

Quarter: the fourth part of a divisible stamp; example is the 1857 issue of Brunswick with individual values of a quarter gutegroschen which prepaid the lowest postal rate.

Quartina: (It.) block of four.

Quartz lamp: a lamp with a quartz filament that shows repairs or tampering on stamps; used for observing phosphors.

Quattrino: unit of currency in the Italian state of Tuscany until 1860.

Queen Anne Act of 1710: provided for a chief or a General Post office in New York, subordinate to Her Majesty's Postmaster General in London with rates fixed by the British Parliament in 1710.

Queensland Railways: railway stamps promoted the "Golden Casket" a state lottery to used to frank letters and packages shipped via the railroad.

Queen Victoria: the Penny Black, first postage stamp issued in 1840, as well as many other stamps, bears her image.

Quepol: one of the Sicmon Islands in the South Pacific created by Nick Bantock for his book, Griffin & Sabine.

Queretaro: overprint on stamps of Mexico for this district, 1856-1883.

Quinta de Goya: (Sp.) inscription for the centenary of the death of Goya, 1930, Spain.